"It's How We Play the Game" by Ed Stack — A Review 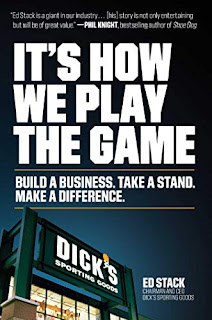 “It’s How We Play the Game” is a business memoir by Edward Stack, the CEO and Chairman of Dick’s Sporting Goods. Published in 2019, Stack shares with the world his life; how it relates to his company and what shaped his current mentality. By incorporating elements of the self-help genre, following a breath-taking writing style, and using immersion with profound success, Stack presents the world a non-fiction masterpiece. This quote from page 21 confirms this analysis.


“No, success is all about what’s inside you, and the most important element of success is simple perseverance—often tedious, sometimes soul crushing, but the great differentiator in whether smarts, talent, and education add up to something bigger.”

Is that not convincing enough? I’ll elaborate.

One aspect of this book, worthy of praise, is the charming writing style. The book uses sentence variety, so it doesn’t bore you with either dull, repetitive short sentences or ugly wordiness and bombast. The prose is magical; it's something discovered upon reading it out loud. Stack challenges you as a reader with longer sentences while using short sentences to give certain details emphasis, making his style engaging. I noticed zero dramatic or distracting offences against grammar, flow, or readability. The economic and management aspects are easy to read. I expected this balance from Stack, a well-educated businessman. In an age where books for an adult audience are reminiscent of the Magic Tree House series, Stack’s style is ramen for the mind.

This memoir also finds the perfect balance between objectivity and subjectivity. For example, Stack gives us a fair observation of Richard Stack, his father and founder of Dick’s. Richard refused to quit after his first business failed; encouraged his son to toil at Dick’s Sporting Goods; had a pleasant sense of humour; stuck with his son until the end. Richard also possessed a fiery temper; manipulated situations, even encounters with the law, in his favour; suffered from addiction; actively berated his children. Stack comes across, to me, as someone who loves his father despite the critical flaws; without pretending those flaws don’t exist. This balance makes the book feel human.

That leads me to another compliment: the immersion. He depicts his situations as relatable. He takes readers back in time so they may grasp the situation in full. On page 35 he writes:


“Everyone smoked, and back then they smoked in the store, which might seem incongruous with a place devoted to sports; at the time, however, even pro athletes smoked in public. It wasn’t unusual to see my dad go through three packs of Pall Malls a day, with a cigarette between his fingers as he roamed the floor…”

Beautifully written! And this passage accomplishes two things. First, it guides readers into a time where smoking was, while deemed healthy, common and sometimes promoted; an alien concept to young American readers who behold “No Smoking” signs at every building. Second, most of us know a smoker. My own father smoked cigarettes since his late teens. He quit recently. The book explores the consequences of smoking (and another deadly addiction). So, I can relate to this predicament—because when I was a child, I feared my father enduring what Richard goes through—and others will too.

The way he frames his situations—even his encounter with Gail at a nightclub, found in pages 78-79, or the deaths in his family—reminds readers that, yes, Edward Stack is wealthy. But he’s still human. This contributes to the self-help aspect; Stack isn’t looking down on you, he wants you motivated—to act and make a difference in your life. It makes me think of how artists depicted the upper class in the 18th century. (Think Élisabeth Vigée Le Brun’s oil panting: Marie Antoinette and her Children.)
One final compliment: the structure is superb. In the introduction to this book he mentions the topic of mass shootings and leaves unfamiliar readers with one question: how does he handle it? By the end of the book, he reveals that answer with admirable honesty. The book refuses to waste your time by staying on topic, but it doesn’t pull punches either.

This non-fiction book is a work of art. If you want a motivational text then you should buy it. This should inspire regular people, business majors and graduates, and entrepreneurs alike. I found inspiration in various ways from reading this.
Posted by B.S. Soper at 6:04 PM