"Nudge: Improving Decisions About Health, Wealth, and Happiness" — A Review 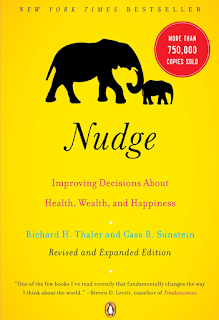 “Nudge: Improving Decisions About Health, Wealth, and Happiness” is a book by professors Richard H. Thaler and Cass R. Sunstein. Published in 2008, the professors argue for libertarian paternalism, defined on page 5 as a system that strengthens freedom of choice, but uses state and private sector incentives (nudges) to improve decision-making. They combine psychology and economics—behavioural economics—in doing so. Today, I effectuate the argument this book is spectacular, despite a few flaws.

Relying on a ravishing and formal yet simple writing style, the book is easy to understand, but it isn’t insulting (they don’t state the obvious regularly). The professors keep the reader engaged with thought experiments and good examples of their policies in action. When they propose solutions, they’re reasonable, for they’re rooted in skilled research. I will provide two examples.

On pages 19-22, the professors define the brain’s Automatic and Reflective systems that form much of the basis for their ideology. They challenge you to make their point stronger.


To see how intuitive thinking works, try the following little test… Begin by writing down the first answer that comes to your mind. Then pause to reflect.

… Most people say 10 cents, 100 minutes, and 24 days. But all these answers are wrong. The correct answers are 5 cents, 5 minutes, and 47 days, but you knew that, or at least your Reflective System did if you bothered to consult it.

The next example comes from page 60:


Consider Texas’s imaginative and stunningly successful effort to reduce littering on its highways. Texas officials were enormously frustrated by the failure of their well-funded and highly publicized advertising campaigns, which attempted to convince people that it was their civic duty to stop littering… Public officials decided that they needed a “tough-talking slogan that would also address the unique spirit of Texas pride. Explicitly targeting the unresponsive audience, the state enlisted popular Dallas Cowboys football players to participate in television ads in which they collected litter, smashed beer cans… and growled “Don’t mess with Texas!…

About 95 percent of Texans now know this slogan… Within the first year… litter in the state had been reduced by a remarkable 29 percent.

I wouldn’t have used those ugly adverbs, but I digress.

These are just two examples of this brilliance. Many intriguing examples are everywhere in the book. And what would a book of this nature be without humour? They cite anecdotal, but hilarious, examples of their ideas in action. At some points, they use episodes of the Simpsons to drive the point home in a funny, but nostalgic (for many), manner.

But the professors avoid bias. They have an entire section for countering counterarguments: addressing criticisms, acknowledge flaws in their proposed system, and offer solutions.  They favour creating “rules of engagement that reduce fraud and other abuses, that promote healthy competition, that restrict interest-group power, and that create incentives to make it more likely that the architects will serve the public interest" (page 243). Additionally, they advocate for transparency (page 247). By being fair and honest, and dedicating time to researching their points, this book earns additional points.

However, the books has issues. First, let us address the faults that aren’t the fault of the professors. Their outdated approach to healthcare, and the defence of the unstable and predatory mortgage system of the late 2000’s, aged like expired milk (pg. 100-101, 136-137).

In the Afterword, they acknowledged the Great Recession, which made news after the book’s publication. They claim it was the worst recession since the Great Depression. (As I pen this, I find this hasn’t aged well either.)

There are some absurdities simple proofreading should’ve corrected. To illustrate this, on page 59 the professors write:


A dramatic example is communism in the former Soviet bloc, which lasted in part because people were unaware how many people despised the regime.

So, the Soviet regime survived because the people didn’t know how much they themselves despised the government? This is a contradiction. Occam’s razor suggests government brainwashing is the culprit. (Much like North Korea today.) Certain conditions in the 1980’s helped awaken the masses.

But the overall book is a splendid read. I recommend this book to copywriters who must nudge consumers to make a living. Those interested in psychology, economics, and/or marketing should read it, including students and teachers/instructors. What would I do if I taught a course related to these subjects? I’d be tempted into making this book a required reading. That is how much I recommend it.
Posted by B.S. Soper at 11:01 AM