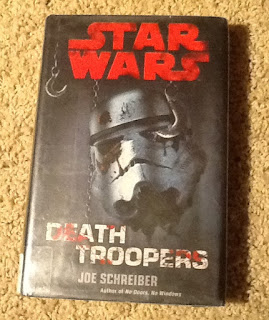 In truth, I wanted to adore “Star Wars: Death Troopers” by Joe Schreiber. Since my childhood days, I’ve loved the Star Wars franchise. I watched all the movies, played the video games, and dabbled with the novels in the early-to-mid 2000’s. I’m fond of the horror genre; while I don’t find zombies frightening these days, many great stories—with a creepy atmosphere and characters—came from their use, such as the Walking Dead. Natural to me, it was, that the idea of fighting off Stormtrooper zombies appealed to me. This book excited me. The problem with Schreiber’s work is an excellent premise with mediocre execution. It isn’t bad—it gets so much correct—but the central focus of the story almost ruined the overall experience.

There’s two brothers imprisoned on the Imperial Prison Barge Purge: Trig and Kale Longo. As they endure prison drama—including persecution at the hands of a Delphanian criminal—a brute captain named Jareth Sartoris and a team of officers, engineers, and medics awaken a force (no pun intended): a virus that makes victims experience psychosis and illness, then turn into zombies. The virus gives Trig and Kale an opportunity to escape. Zahara Cody, the chief medical officer on the Purge, develops an anti-virus vaccine with the help of Waste—a 2-1B surgical droid. She encounters two smugglers on her way to assist the infected; they doubt the virus story at first… Until one of them almost turns. In time Trig, Kale, Cody’s, and the two smugglers team up. Can they survive the outbreak?

The writing style of Schreiber is the strongest point of the novel. He uses sentence variety to keep the reader engaged, without resorting to redundancies or pretentiousness. Though cases of errors or weak writing (i.e. inappropriate use of passive voice) are present, that mattered little in the grand scheme. Besides being engaging, Schreiber’s writing style compliments an immersive, melancholy atmosphere that fits the novel. The best horror fiction relies on atmosphere to terrify readers. A scene of someone’s murder isn’t scary on its own, but can be terrifying if the atmosphere is gloomy, oppressive, and/or uncanny. Many points in the novel demonstrate this.

Trig Longo had come to dread the long hours after lockdown, the shadows and sounds and the chronologically unstable gulf of silence that drew out in between them… Sometimes he would actually start to drift off, floating away in the comforting sensation of weightlessness, only to be rattled awake—heart pounding, throat tight, stomach muscles sprung and fluttering—by some shout or a cry, an inmate having a nightmare (Page 3).

The first thing [he] felt was the pain of the young ones. It came at him from everywhere at once, a threnody of wounded voices, assailing him from all sides. He didn’t know what it meant except that something bad had happened here aboard the barge, and now it was happening to him, too. In a horrible way he felt as if he were part of it, complicit in these unspeakable crimes, because of the injection that the woman had given him. The sickness she’d implanted under his fur, under his skin, was alive and crawling through him, a living gray thing going up his arm to his shoulder to his throat, and the sickness clucked its tounge and whispered, Yes, you did those things, yes, you are those things (Page 102).

He’d first seen them [dark figures] coming right after all the shooting had died down, only a handful at first, then more, now dozens—traveling en masse, a single organism made up of countless smaller components… They were coming for him (Page 176).

Yet the weakest point of the novel almost ruins the atmosphere. The plot.

The plot does little to distinguish itself from other zombie tales. It relies upon subgenre tropes—including a biological weapons program to explain the zombies—that makes it predictable. It’s not cliché or bad, per se, but it’s problematic when the characters, the actual focus of this novel, are one-dimensional, lacking depth, memorable personalities, or proper development. Summarising these characters in ten words or less isn’t difficult. Trig is a whiny, cowardly bastard. Kale is the older, braver father figure. Zahara is merely the “strong, independent woman”. Sartoris is a selfish brute. Waste (the droid) spews scientific information. Yet the novel expects readers to care about these characters. I’ll confess that I wanted to stop reading by the end because I couldn’t care, finishing it with a “get this over with” mentality.

The crew that gets the virus first were so forgettable that I couldn’t recollect their names without going back again. Their purpose? Getting the virus and spreading it. Why have characters—with names or personality traits—if their meaning is death within a short time span? Might as well have made them generic Stormtroopers.

Real-life people have complex personalities, and traumatic events, counting absurd ones like a zombie outbreak, would impact them. Yet none of the characters change in any meaningful way by the end. (I can’t elaborate without spoiling anything.) Schreiber is a writer with great strengths but haunting weaknesses. At least this novel is evidence of that claim. I’ve yet to read his other works.

This story would’ve been better off as either a short story or novella. Had the characters been fleshed out, which might’ve required making the novel longer, the story would’ve been fantastic. In its current (and only) form, it’s a mediocre text that isn’t bad because of the great and memorable moments. You want a quick read that might induce nightmares? This text is worthy of you. If you want a text with decent drama, look elsewhere.
Posted by B.S. Soper at 5:20 PM