"President Reagan: The Triumph of Imagination" — A Review 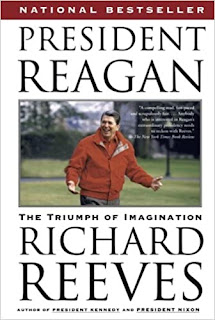 Richard Reeves wrote the biography “President Reagan: The Triumph of Imagination,” having it published in 2005. The book itself is informative, gripping, with a straight-to-the-point but eloquent writing style, emphasis on the humanity of the Gipper, and the domestic and international politics of the 80’s. Indeed, the topics explored by Mr. Reeves include how America dealt with the Israeli occupation of Lebanon; the Shakespearean drama in Congress over budgeting; the relationship between Gorbachev and the U.S. President; and the internal struggles among the cabinet. Riveting information packs each page. In this regard, the book is a masterpiece worthy of those interested in political science, history, and the Reagan presidency itself. This book, however, is not perfect.

Although the author claims to “reconstruct a President’s world from his own perspective” (page xiii), he reveals his personal biases throughout the book. Two pages after this quote, Mr. Reeves pens, “President Reagan did not win the Cold War and end communism, but he knew it was going to happen.” This passage should invoke cringe and nausea in historians. Dear reader, you are aware of the current occupation in Afghanistan, yes? During the Reagan presidency, the Soviet Union attempted a comparable occupation. WorldAtlas reports the natural resources of Afghanistan includes: copper, natural gas, and petroleum; and “Other minerals include lithium, marble (which brings in about $15 million through exports every year), rare-earth elements (whose value is not yet known), uranium, and others.” Picture a world where the Soviets obtained unlimited access to these resources, and the labour of Afghanistan, like they did in Eastern Europe. They could’ve revived their economy with ease, which means they could still be here. By stopping the Soviet invasion, Reagan gave assurance to the world the Soviet Empire would collapse. One of many examples.

Another complaint includes the over reliance upon the same sources, many biased. Funnily enough, he does this after confessing to and denying bias.

I might release an article that explores how to write a proper biography; if I do so, I shall elaborate upon the notion that biographers must, even if they have a personal agenda against the person they are writing about, avoid bias if they wish for serious reactions.

Overall, Mr. Reeves wrote a decent book. I enjoyed it. But it is not completely reliable, for it is informative yet biased.

"Creativity, Inc.: Overcoming the Unseen Forces That Stand in the Way of True Inspiration" — A Review 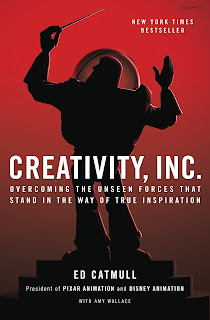 Today I finished the book “Creativity, Inc.: Overcoming the Unseen Forces that Stand in the Way of True Inspiration” by Edward Catmull, the President of Pixar Animation Studios and Walt Disney Animation Studios. Amy Wallace co-authored the book. I find this text admirable, for Catmull put together a piece that combines charm, history, and management to entertain, inform, and inspire readers.

I shall begin, dear reader, with the writing style. Mr. Catmull balances, with near perfection, elegance and simplicity. With American authors, this accomplishment is a rarity. Intelligent writing, without pretentiousness or bombast, is desirable. And this is best done via variety in sentence length, structure, and vocabulary. Allow me to provide some examples:

"I walked away from [the University of] Utah with a clearer sense of my goal, and I was prepared to devote my life to it: making the first computer-animated film. But getting to that point would not be easy. There were, I guessed, another ten years of development needed to figure out how to model and animate characters and render them in complex environments before we could even begin to conceive of making a short—let alone a feature—film." (Page 20)

"This is the puzzle of trying to understand randomness: Real patterns are mixed in with random events, so it is extraordinarily difficult to differentiate chance and skill. Did you arrive early to work because you left on time, planned ahead, and drove carefully? Or were you just in the right place at the right time?" (Page 156)

"Typically, people imagine consciousness to be something that is achieved inside our brains. Alva Noe, a professor of philosophy at the University of California at Berkeley who focuses on theories of perception, has suggested another way of thinking about consciousness—as something we do, or enact, or perform in our dynamic involvement with the world around us. Consciousness, in other words, happens within a context." (Page 180)

Catmull, in certain ways, demonstrates his genius temperament and education—but he bears in mind his actual audience: the like-minded among the commons. Arthur Amis and comparable British authors achieved this balance. And I wish American authors—like Mr. Catmull and Mr. Stack have—did as well.

What gives this book extraordinary merit is the useful insight. Mr. Catmull, without a doubt, has profound, intriguing experiences. He discusses: his business relationship and friendship with Steve Jobs; computer programming in the 60’s and 70’s; and the challenges faced while creating films like The Incredibles. And this ties into the management aspect, where Catmull provides useful advice for business majors, inspiring entrepreneurs, and creative thinkers. A summary of his views—which the through, riveting tales and deductions scattered throughout compliment— follows:

"Candor, safety, research self-assessment, and protecting the new are all mechanisms we can use to confront the unknown and to keep the chaos and fear to a minimum." (Page 185)

I recommend this book for: