"Life Without Oil: Why We Must Shift to a New Energy Future" — A Review 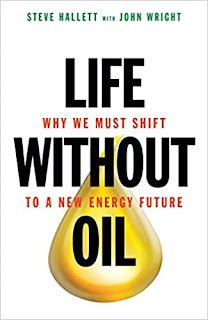 Much came to pass in 2011 within the realm of book writing and publication. But one example of acute interest, the subject of this review, is “Life Without Oil: Why We Must Shift to a New Energy Future” by Steve Hallett and John Wright. This book features solid arguments—which the authors affirm with research and intelligent musings—but much of the text suffers from flaws they should have addressed before publication. But ‘tis an enjoyable read that one must consume with skepticism.

Provision of context is justified. Dr. Hallett teaches horticulture and landscape architecture at Purdue University. Between 2002 and 2014 he accumulated many academic awards and honors. Last year, he contributed to the Illinois Agrinews. Mr. Wright is a journalist with a solid portfolio (and past worthy of an autobiography). Before this book, he wrote "The Obama Haters," and more recently "History is Watching: How Do We Respond to Trump?" These distinguished backgrounds led me to develop a theory: that Dr. Hallett conducted the research while Mr. Wright handled the writing. But I do not have sufficient evidence for this.

In summa, Dr. Hallett and Mr. Wright presented before their readership a thesis: peak oil—that the black substance is scarce (who would have guessed?) and, eventually, cannot be extracted, meaning supply will not meet demand—shall bring harrowing devastation to global markets and international political stability. Perhaps not of Biblical proportions, but close enough.

They justify their predictions with patterns and data. They note, for illustration, how ancient civilisations—from the Easter Island inhabitants to Medieval Europe—contributed to extreme environmental decay, namely deforestation, to secure short-term economic success. Dr. Hallett and Mr. Wright also noted other human predicaments. Tying subsidised fishing to the tragedy of the commons. Or the Soviet Union, depending upon petroleum to compete with America, collapsing even after the humiliating de facto colonisation of a resource-rich country like Afghanistan.

What is the greatest strength of this book? Well, dear reader, it is the research and deduction. For the authors justified their points with credible sources and logic. All of which you can verify with their thirty-one pages of notes at the end. They also draw upon many fields like economics, ecology, history, politics, and psychology; ‘tis fitting, because the concept of peak oil intertwines them all by nature. Had they not shewn us their references (like some people. Why am I coughing?) then I would question the reliability of "Life Without Oil." We must, after all, reject assertions made without reasoning or evidence.

The second positive, however, stems from the smooth writing style. Though sporadically passive, the book balances academic verbosity with conversational brevity. The style, therefore, is dynamic, which is a nice touch. But while the authors confess to a pessimistic outlook, despite reasonable solutions like nuclear energy. (Well, not reasonable to the commons.) But they balance out the melancholy with cheesy humour. Even I admit to laughing at the absurd descriptions of real-life events. (Their depiction of the “war” over fisheries between Iceland and Britain is comically poetic.) Dear reader, you shall be glued to that chair upon reading this.

But while I admire how well-researched this text is, there are humiliating o’ersights that should not have survived the editorial processes. (If there were any beyond the final draft.) You can find my favourite example on pages 189-90, where Dr. Hallett and Mr. Wright penned:


Fritz Haber was awarded a Nobel Prize in 1920 for the invention of an industrial process for fixing nitrogen—which must surely qualify as an evolutionary-level invention. The first major application of the Haber process was not in agriculture, however, but in warfare, and Fritz Haber has a very nasty legacy. Cut off from dwindling supplies of Chilean guano when war broke out in 1914, the German Empire used the Haber process for the production of nitrate for bombs and then for the synthesis of chemical weapons in the trenches. Later, Haber would participate in the manufacture of Zyklon B, the poison used to murder millions in Nazi concentration camps. When the Haber process became the mainstay of the fertilizer industry, however, we conveniently overlooked his contributions to genocide and lobbed a tainted Nobel Prize at him.

How should I begin? First, per The Nobel Prize organisation, Fritz Haber earned his award for his process in 1918 (picking it up in 1919) not 1920. If you see this as nitpicking, fine, but, by attacking his character, the authors make notable fallacies. While ‘tis true Zyklon B was his doing, he perished in 1934, eight years before the Nazis used it in concentration camps. And he did seek to shew his patriotism for Germany by developing chemical weapons, yes, during a war with Britain, which implemented analogous measures. What genocide did he knowingly contribute to? I am aware they despise how industrial agriculture exploits his discoveries. However, Haber is not responsible for how entities, private or political, abuse his inventions.

This book scatters comparable factual, fallacious mistakes. I will give them the benefit of a doubt, but readers already skeptical of environmentalist claims shall not. For it seems like an unwarranted, arbitrary attack made by biased individuals. How the hell did they mess this up? And speaking of bias, I wish they spent more time addressing counterarguments. In a post-truth era—where, as Pew Research notes, millions deny man-made global warming, and therefore likely reject the solutions Dr. Hallett and Mr. Wright proposed (which align with climate activism)—'tis an imperative, necessary endeavour.

This book shall convince, or empower, those already in agreement, inclined to accept environmentalist claims like myself, and certain fence sitters, but even they must read this with caution because of the errors. Otherwise, find another book.

Fagan, Moira, and Christine Huang. A look at how people around the world view climate change. Pew Research Center. https://www.pewresearch.org/fact-tank/2019/04/18/a-look-at-how-people-around-the-world-view-climate-change/.