"Unnecessary Roughness: Inside the Trial and Final Days of Aaron Hernandez" — A Review 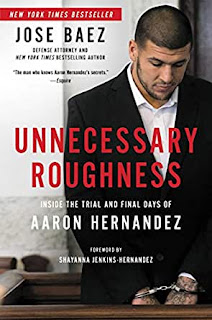 Imagine a scandalous legal predicament that combined: the public outrage of the O.J. Simpson trial; the desperate, racist scapegoating of the Central Park Five case; and the similar psychological and criminal circumstances of the Chris Benoit tragedy. This combination would create the Aaron Hernandez trials. And the book I put forward today, dear reader, deals with that subject—”Unnecessary Roughness: Inside the Trial and Final Days of Aaron Hernandez” by Jose Baez and George Willis; and it deals with, as the title suggests, the disgraced football player’s struggle for freedom and justice and survival, all from the perspective of his attorney Baez.

A consequential reason as to why I found this book so immensely pleasing is Baez’s personality, for he exhibits traits that imply a profoundly decent, likable man. He is, first of all, abjectly charming and fiercely honest, managing to find a balance. Throughout the text he criticizes and shews the hideous flaws within our broken, corrupt criminal justice system, without fail or political correctness. On page 107, for instance, he describes how rats—those who snitch on others in hopes of extracting rewards fair or unfair—may be one’s undoing; for they create conflicts of interest, get innocents arrested for crimes they never committed (echoing Michelle Alexander), and allow dangerous criminals to roam liberally. Someone who has to operate and make a living in this system would profit from putting these things mildly. But he demonstrates courage with his bluntness.

But he balances this with charm. He gives his rivals, for lack of superior phrasing, credit whenever is due. On page 128, he compliments the prosecution for accurately displaying the timeline, relationships, and evidence for what transpired when the murder occurred. He even describes their presentation as “airtight.” At one point, he compliments the integrity and fashion-sense of the prosecution. On another note, Baez depicts Aaron as a humble, albeit flawed personality that deserved respect and dignity throughout the book, despite public perception to the contrary; he sticks to his client even after death—’till the bitter end! And I have no reason to doubt him.

Secondly, he reveals much of his personality through his prose style. He, with the perhaps invaluable assistance of Mr. Willis, employed a style that is simple, straight-forward, and, most importantly, intelligent. This style is possibly what kept me going, for he wants to, on one hand, present himself as an everyday gentleman, and, on the other, a principled intellectual; and such a balance is necessary when lawyers are frowned upon by society, so appealing to the lowest common denominator without oversimplification becomes paramount. (Especially defence attorneys handling controversial cases; and I’m still waiting for a memoir by Shannon Smith, who defended a loathsome monster who shall not be named.) There were parts, however, where this style faltered. He doesn’t use proper dialogue formatting (e.g. page 241) and employs synonymous, thus redundant, adjectives (page 138). But I don’t believe such nitpicking is warranted for an otherwise decent book.

Thirdly, I adore Baez’s sense of humour. On page 201, he tries to provoke Alexander Bradley—a backstabbing criminal testifying on the prosecution's behalf—using sarcasm and imitation. I bursted out laughing at this part. Again, this is another effort to appeal to general audiences, which is most respectable.

Finally, I feel Baez managed to convince me of Aaron’s innocence. Throughout the book he pokes holes in the prosecution’s case—such as a street sweeper potentially interfering in the crime scene, thus rendering the evidence procured thereof useless (pg. 71)—which helped convince the jury there existed reasonable doubt. (And if I were the jury, I would have voted not to convict because of the arguments presented here.) But he also explains why the police can be unreliable. Did you know, dear reader, that in only a few states, like Florida, officers are required to endure depositions under oath (pg. 60)? I feel his arguments and professional insight are without flaw.

This book, however, is not perfect. An embarrassing contradiction in the novel became a singular pet peeve. On page 2, Baez writes the following:

Aaron would often describe how he’d sit down on his bunk and rub his temples. His friends knew of his frequent migraines that began with a dull ache in his head. They had become more frequent of late. He would lie down and throw a T-shirt over his eyes to block the light shining through the small, barred window about eighteen inches wide and three feet long.

He continues on page 3:

One moment he is lost in love and thankfulness, looking forward to a future as a free man again. Then the depression and the pain must have come back.

In other words, the symptoms of CTE were obvious from the start, and Baez implies he was aware of this information around the time he agreed to take the case. Yet in Ch. 22, he claims he beheld zero evidence his client had CTE. He makes a similar contradiction shortly after on page 251, claiming he did notice CTE symptoms in Aaron. How did the editor(s) not notice this?

My last complaint: I wish more time would have been spent on the friendship between Baez and Hernandez. Despite this being a work of non-fiction, I believe the rules of character development apply here. While the last few chapters were strong, and even I felt saddened by some of the details, it would have been even stronger, as in more convincing, had he spent more time on their friendship; instead we get only some brief glimpses of Baez and Hernandez’s discussions and the latter’s time in prison. Certainly fixing this would have made the book longer—perhaps exceedingly so—but in a necessary manner.

I think Unnecessary Roughness is a good book. I enjoyed every page. And I would recommend it to everyone who wants: to find an in-depth analysis of the Hernandez scandal, to gather arguments or quotes in favor of criminal justice reform, and to seek discussions about football—its legacy, its players both famous and infamous, and its ethical problems.
Posted by B.S. Soper at 12:48 PM