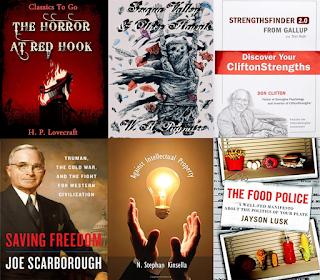 Review of The Horror at Red Hook by H.P. Lovecraft

Although in many respects this tale rightfully violates our modern sensibilities, The Horror at Red Hook remains a worthwhile, splendid read. Lovecraft's meticulous use of rhythm and visuals; his exploitation of mankind's natural fear of the unknown; the research he conducted in advance; the lovely impersonal, archaic style which gives the prose an academic feel—all of what makes the author one of the greatest creatives in recent memory one will find in here. While the racism present perverts an otherwise perfect plot and thus cannot procure five stars, I would still recommend anybody with free time study it.

Review of "Sesqua Valley & Other Haunts" by W.H. Pugmire

I read this collection December of 2020. I spent several weeks studying the stories & it did not disappoint. Pugmire established himself over the years as an ingenious creator, learning from masters like Poe, Lovecraft, & Blackwood. Every syllable, every word, & every detail contributes to the final effect without fail. He employs poetic devices (even contractions to enforce a rhythm) & appeals to the reader's senses with lifelike imagery & smartly-written, sometimes voluptuous descriptions of smells, taste, & touch. Pugmire tells tales that stay trapped in the mind—best read at night. It is a must read worth every penny. And may the genius behind these stories and poems rest in peace.

However, I cannot give it five stars. Mr. Scorbourgh felt the need to insert irrelevant present-day politics into an otherwise objective text. See his opening to Ch. 6 where he references Donald Trump's criticisms of the media (not by name). It is my view that if somebody is writing a historical piece, they should stick to the facts unless something in the present is relevant.

Other than this criticism, this is a great book I took immense pleasure in reading. I would certainly recommend it for anybody interested in the Truman presidency.

Review of "Against Intellectual Property" by N. Stephen Kinsella

I was able to secure a cheap used copy of this text recently. While the first part is an exercise in inspiration & reason, once you're prompted to take a test it becomes worthless until you pay upwards of $50 to take it online; and the text merely describes which traits said examination gives you. Unless this is a mandatory reading for college, spend your pennies elsewhere.

The problem with this text is it mostly addresses certain policies—like the prohibition of "big gulps" in Michael Bloomberg's New York or the imposition of sin taxes on various foods and beverages for their unhealthy qualities—on the notion they violate liberty; namely the liberty of consumers to choose, without state-sanctioned artificial barriers or coercion, that which satisfies their preferences. Yet liberty is the pursuit of virtue. What virtue is there in gluttony; in the distribution and sale of addictive substances which produce a sluggish, hopeless existence? Research consistently shews our unhealthy diets have hideous outcomes—higher rates of depression, higher rates of certain diseases, higher medical costs, physical weakness, etc. And the harms of this affect everyone. Making sugar more expensive to consume and healthier foods cheaper to purchase is just one of many ways to promote the long-term well-being of the soul; for what we have beheld is half the population being enslaved to the vice of gluttony, in the same way a drunk is enslaved to alcohol.